It is the year 1899 and the world is in the grip of the Great Game as Victoria, the Everqueen of the British Empire, duels with the North Tsar of Russia for global supremacy. Despite Tsarist advances in Central Asia, the British conquests of Afghanistan and Sudan have given them the upper hand. But now the Scryers of the Court of St. James foretell the emergence of the greatest threat to the Empire since the demon Napoleon a century before.

A new power is rising from beyond the realms of the human nations, from the uncharted lands at the base of the world.

The frozen continent of Anarktica.

What this is
Anarktica: Fate of Heroes is a steampunk story game written by Richard (writing as Epistolary Richard) and others. It was first released on Free RPG Day 2012 (16th June). It is completely free to download, to reproduce and distribute (though, if you play it and enjoy it, charitable donations to the Mines Advisory Group are encouraged).

Anarktica tells the story of a group of four heroes, their journey across the land of Anarktica, and their encounters with its inhabitants, creatures, monsters and mysteries. Outwardly brave and resolute, each hero is saddled with a terrible secret that tears at their soul and taints their trust in their companions until finally they encounter the Adversary and their true nature is revealed.

Downloads
Anarktica can be downloaded as an A5 pdf. Download the Game Book - containing the rules - and Game Materials - containing the character sheets and resolution cards (you need both).

The game book and characters from the game materials 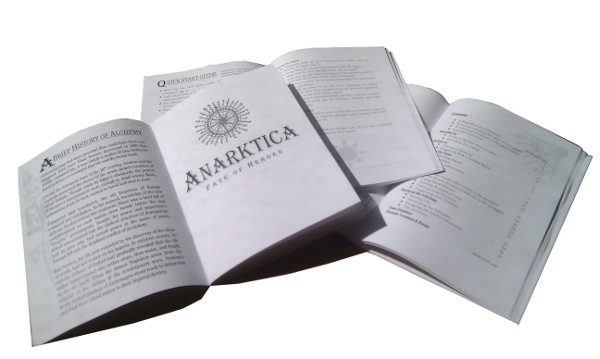 Interior of the game book 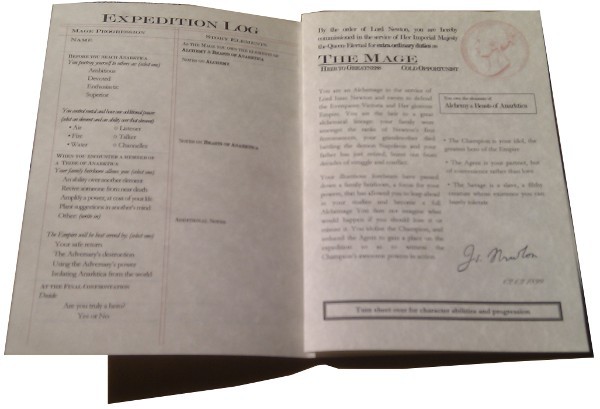 Example character sheet with log from the game materials

What's a story game?
It's a lot like sitting around a campfire with a bunch of friends, one of you starts off telling a story and you go around the circle with each one of you adding more to it until your tale's complete.

It's not like a novel because you create it with friends and together you end up telling a unique story each time. Nor is it like a 'choose your own adventure' book where you have restricted options at each step because you're free to narrate almost whatever you like. Game is really the wrong word for it. It's really a toy you explore together. There are no ways to win or lose, only to have fun playing with it. If you wanted to use big words you might call it a story generated by collaborative narration operating within and inspired by the content of the game book.